Redmond Washington is home to some of the biggest names in business. Microsoft, Nintendo, Amazon, and many more tech startups. Washington State has long been a destination for companies looking to expand in an area that is cheaper than California but still keeps them on the West Coast. The 520 Freeway connects Redmond to Seattle and passes through areas of Kirkland and Bellevue along the way. The freeway has been under construction for years as growth in the area has surpassed the States ability to manage roadways and traffic. Just in the past few years, the 520 went from a 2 lane bridge in each direction to a 4 lane bridge. The 520 is also now a toll bridge, so commuters are now opting to go around Lake Washington to get to the northern part of Seattle. What we have noticed during this time period is an increase in traffic-related accidents. This increase in automobile accidents is caused both by the flood of residence in the area moving there and commuting to and from work daily, but also from poorly cared for roadways that erode from the constant rainfall the Seattle experiences. Washington has a yearly rainfall average of 38.19 inches of rain. This amount of rain washes out roads and causes other natural problems like mudslides that also impact the road quality. That being said, when traveling from Seattle to Redmond the 520 dumps you out either onto Leary Way or on to Avondale Road which will take you to Woodinville Washington. 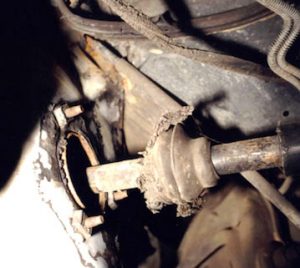 The traffic becomes extremely congested in this areas as commuters use this access point to travel to and from Seattle. The poorly maintained roadways and constant road construction leave commuters dodging potholes and traffic barricades. Potholes become a major issue as vehicles crash into holes that exceed 6 inches in depth and can experience alignment and balance issues in addition to blown out tires. We spoke to a Redmond mechanic who went on to say that oil pans and axles also suffer from debris on the road. As the roads break up and the asphalt breaks loose it becomes a road hazard and bounces along the underside of moving vehicles causing damage to the parts underneath. They get hundreds of vehicles a year into their Redmond Auto Repair Shop and the issues are consistent from vehicle to vehicle. the damage caused from loose asphalt is never-ending, and the road barricades that force drivers down narrow unmaintained portions of the road are to blame. Washington State needs to fix its road problem at a rate that keeps pace with its growth, or more car owners will be spending more time at the mechanic shop.